We All Fall Down 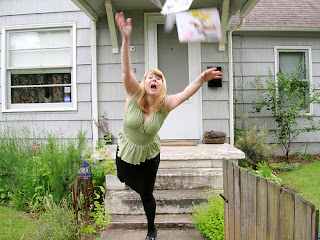 Yesterday I hit another mini milestone. I went to IHOP for brunch. I used to love breakfast and ever since my last flare up of anxiety I have been avoiding anything that was the least bit heavy or daunting. So for me to suggest going to breakfast where I knew there would be a big plate of eggs, bacon and French toast was taking a small risk. Granted I went with Ty who is my support person and I was a little anxious while I was there, but I ate a lot (I was hungrier than I realized) and the food was so yummy. So hooray for me :) I am trying to enjoy myself while things are going well because I know that at anytime I could lose my bearings and fall... again.

When I had my major setback in , I was crushed. I thought I had come so far and had accomplished so much and I had lost it all. In fact I thought I was worse off than before I started because I had a panic attack almost everyday. I would wake up nauseous and it wouldn’t leave until the evening or until I threw up, whichever came first.

When I got home and it was still there I felt like a total failure.

My therapist told me that I shouldn’t think of a set back as having to start back at square one. There is knowledge that we have gained that doesn’t leave us. There is also some good in analyzing our setbacks and figuring out why we think it happened and what we could have done better to prevent it.

I learned from my last setback to not get caught up in the idea that I am cured and don’t need to properly prepare myself for triggering situations. I left without enough medication, which was not smart. So I know now that no matter how good I feel I always want to have a back up plan just in case.

So if you are in the midst of a break down and are beating yourself up for it, don’t. You are learning something valuable right now and you just have to figure out what it is.

Thank you so much for reminding me of this. I try to remember, but sometimes I forget. (I really like your blog, by the way).

Welcome Edie! I just took a gander at your blog and I like yours too! Congrats on a Good 4th of July. Its nice when you have something in common with strangers than you don't have to think of something to say so hard. Isn't it interesting that we can talk for hours with people we see every day and then a complete stranger that we know nothing about and have so much to learn is so hard to find something to talk about?

Aimee, Thanks for the comment on Debasers blog.. I really like your blog. I read it everyday. Linda

Hi Linda :) It looks like your post eventually worked, sorry it was giving you trouble. How was your Fourth of July?

P.S. I am so glad you like my blog- let me know if there is any topic you are more interested in.

you talkin' to me?

Hey Molly- it seems like on most blogs I am reading or comments I have noticed were somehow related to this topic so it was in my thoughts. I hope that you start feeling back to normal soon. I wonder if they have any safe drugs to take during pregnancy because I will need to look into that. Otherwise when and if I ever get pregnant I might just be out of my mind for the first trimester. It will be a real challenge!
Smile :)

I wonder the same thing about having children, because I know all the meds I take say they're unsafe for pregnancy and/or breast feeding. Then there's the fear of what I'll pass on to my kids genetically as far as my problems, and how I'll deal with knowing I did that to them just by having them. Of course, I may never have to worry about this if I stay the crazy cat lady and don't find a husband before I'm too old to have kids. I think I worry about that one more than the other issues babies bring up.

Two steps forward, one step back. The forward steps are always more than the backsteps!

Having babies is really something to ponder, because I know in my case everything got worse when I was preggers, and it got worse each time. Hormones, y'know. But on the flip side, you may want to look at it like this- pregnancy only lasts nine months. Go into it knowing you are going to do nothing but hibernate and do the hard work of building a healthy body for your baby. Don't make any commitments, don't work if you can, and just stay home and be. That helped me a lot. When I would focus on the baby and spend my good days preparing for him, I would be ok. Then once baby got here, I would feel so much better. Also, you don't need to worry about passing bad things on to baby- if you eat really healthy when you are pregnant, you can stave off all kinds of things.

I have been anxiety and panic free for five years. Last week I traveled from Connecticut to California and now that I'm here I am right back to the throws of my illness. I was completely sleepless for three nights and spent a day in the ER. My negative self talk is back, and it's attacking me every two seconds.
It's so difficult being so far from home, and I worry about never being able to get home again. I worry about everything actually :)
Any blog posts you have about travel anxiety or how you worked through it on your trip to Hawaii would be much appreciated.
I CAN DO THIS! I have done it before. I can do this. I am safe :)