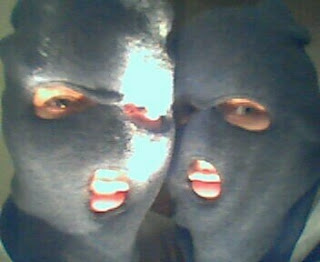 photo by Jakob Lodwick
Last night I dreamed that I was going to a family reunion and I was really nervous and anxious about "preforming" in front of my family. I woke up with my stomach all in knots and feeling anxious. I realized I was breathing pretty quickly so I tried to slow it down and take deep breaths.I fell back asleep only to have more bad dreams about my family. They weren't violent or super disturbing like some of my dreams are so thats good, but I hope it doesn't make me have anticipatory anxiety for the next time I go home.

An update to my earlier blog about morning anxiety: I did get a new bed- I went from a Queen to a California King and I love it. That means new bedding too. That hasn't been enough to stop the nightmares though. I do a pretty good job of getting around 8 hours of sleep a night. So there has to be something else I can do to make them stop. I'll have to work on it some more.

This morning I had a bad scare. I was booting up the computer in my bedroom when I heard the doorbell ring. Normally I answer but I was home alone, and there have been warnings on the radio of daytime home robberies raising in our area. What they are doing is knock on doors and if someone answers they act like they have the wrong house and if no one answers then they try the doorknob and go in. Everyone that I could think of that would be stopping by should have been at church so I figured it was probably a door to door salesman (they are stopping by ALL the time in the summer) or someone like that. So I ignored the door. Plus my two dogs bark like crazy so I figured they are a pretty good reason for robbers to go to the next house instead of try mine. So after a good 5 minutes, the doorbell rang again and I started to get nervous. So I went to my closet to put some clothes on and debated opening it or not. Suddenly I hear the door open and someone came inside. I cowered in my closet and didn't know if I should close the door and hide in there or if I should confront whoever it was. I racked my brain trying to figure out who it could be and scrambled to put a shirt on. I heard the person calling my dogs by name and putting them in the backyard. I didn't recognize the voice and wasn't really comforted that they knew my dogs name. I went out to see who it was and it was my brother in law that came to work on my basement. I didn't think he would have come because he is an avid church goer and I thought thats where he would have been. I was so scared when someone came in. But I was relieved it was a family member. I guess I should lock the door when I am home alone in the future.

Email ThisBlogThis!Share to TwitterShare to FacebookShare to Pinterest
Labels: Dreams and Nightmares

OH MY...THAT WOULD HAVE SCARED ME TO DEATH!

We have had break ins in our neighborhood too...forced entries. If I am home alone I flat out IGNORE people at the door!

Scott and I went from a full bed to a king last year, I sleep 100% better!

I NEVER leave my doors unlocked. Even my windows have nails in them so they can only be opened if I pull the nail out (not hard to do the way my brother set them up). I'm glad it wasn't me in your situation, something terrible might have happened. The first thing Dad gave me when I moved out was a revolver, and the only people who can get in my house are my parents (and maybe my landlords) because they have keys. Even when we lived in the middle of nowhere, my parents taught me to keep all the doors and windows locked. I don't understand how people can sleep with their windows open.

Oh Aimee how scary. Other people don't understand growing up Thornton, where the doors were never locked because there was always someone home! And who wanted to bother with keys? There was nothing worth stealing anyway! I would have been terrified as well. Isn't it crazy what we decide to do? Hide in a closet and put on a shirt? I would have done the same exact thing-in fact I have done that, but what we really should do is call the cops or something. Rock on Aimee you are going to make it.

Girl lock your doors! And get a peep hole. I have anxiety with doors, I feel like if someone knocks, or someone calls on the phone, I'm in trouble. So I make the husband answer. :) But caller ID and a peep hole have helped a lot, now I can answer if I want, and if I don't want to, I don't!

Be careful. Dogs are great, but sometimes not quite enough to keep you safe! My doors are always locked. My husband and I have been known to lock each other out, it's such a habit. :)