"Why do you look for the living among the dead?"

The following post comes from my friend Bill from Hope and Healing Dynamics. Being on his own journey, seeking peace of mind, he has much to offer and I so love what he has to say. You can see he has a button on the right sidebar  (Freedom! From Panic and Anxiety) that will take you directly to his site if you come back later and can't find this post. Thanks so much Bill for sharing your "ah hah!" moment with us. 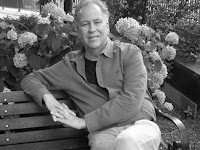 In the midst of desperation, have you ever exclaimed either of these to yourself or someone else?

I know I sure have. And they’re probably the most common verbal expressions of pain and frustration I hear from anxiety and mood disordered clients. Actually, the whole concept makes perfect sense, doesn’t it? I mean, who wouldn’t want to return to a time of identity and comfort when all is unhinged, barren, and cold. Well, some six years ago something occurred quite unexpectedly that awakened me from futile dreams of the past.

I had been in the throws of anxiety, depression, and desperation subsequent to some very distressing family situations six months prior. And instead of working toward a valid peace grounded in the present, I became obsessed with rekindling an internal fire that had been fueled by wishes and myths. Yes, I was grasping at what I believed to be the most accessible measure of familiarity and stability. And it made perfect sense to adopt the watchword, “I just want to be the way I used to be.” But, out of nowhere, something occurred that would forever change my perspective.

Okay, so there I was, one taut mass of mind and flesh pacing around my apartment on a steamy summer afternoon. And in the midst of all the agitation a quotation from, of all things, the Bible pervaded my being. Now, I was raised in a Christian home; however, I was not a Christian at the time, nor am I now. Nonetheless, a scene from The Book of Luke, Chapter 24 became a part of me. You may know the story. It seems Mary Magdalene, Mary the mother of James, and a woman named Joanna went to Jesus’ tomb with spices for his body. Well, when they got there the stone at the entrance to the tomb had been rolled away and the body was gone. Needless to say, they were puzzled and frightened. And as they pondered what they’d seen, two men appeared to them, posing this amazing question…

“Why do you look for the living among the dead?”

Bam! The power of the query struck me like a bolt of lightening right between the eyes. And I immediately turned inward, asking, “Bill, just why are you looking for the living among the dead?” The truth of the matter was, what I’d been looking for no longer existed; and hadn’t for decades, if ever. So, with the introduction of that huge dose of reality, why would I choose to waste my time desperately pleading for history? Wow, the inquiry was that powerful!

If you can relate to any portion of my quest for comfort, I’m going to suggest that you ask yourself what I now call “the question of the angels” the next time you’re in the abyss of struggle and desperation. I mean, don’t you think it has the power to trump our natural inclination to rummage through a million yesterdays in the quest for relief in the immediate? Now, don’t misunderstand; the past is significant, forming so much of who we are today. However, it’s only relevant within the context of how we became who we are, a reference for decision-making, and the sweetness of reminiscence. Yes, there’s just no way we’ll ever live and grow, today, if we’re planted in depleted soil.

Does any of this make sense to you? Well, don’t short-circuit your mind just now, trying to make perfect sense of it. Just swirl it around for the next day or so and see what comes together. However, in the end, I believe adopting this personal philosophy will open so many doors for you.

“Why am I looking for the living among the dead?”

I feel like there's a common thread to everything I'm researching about anxiety lately...and this fits right in with it. Don't fight it, welcome it; don't resist it, but look for ways to let it change you. If you're always looking to the past and wanting to be the way you were you're basically telling yourself you're not okay right now, anymore, you're fighting it and resiting it.

Idk if my brain can wrap around welcoming the anxiety and panic attacks today...but I love where he says, Well, don’t short-circuit your mind just now, trying to make perfect sense of it. Just swirl it around for the next day or so and see what comes together. So that's my goal.

Thanks for the awesome information and post, I'm off to check out his site and book mark it!