Having the Faith to Endure the Hard Times

Faith- [feyth] -strong or unshakeable belief in something, esp without proof or evidence.

I do a lot of thinking when I am in the shower. Its the only place where I can really be alone and let any emotion out that I want without worrying about my kids seeing me so upset. So the other day I was taking a shower and I just sat and cried. I did a lot of praying in that shower. I found myself pleading to Heavenly Father to take away my anxiety and I suddenly heard in my mind,

“Father, if you are willing, remove this cup from me. Nevertheless, not my will, but yours, be done.” 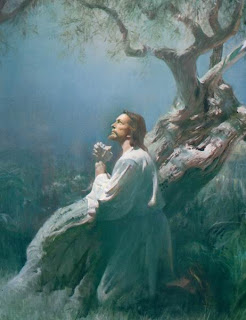 My thoughts turned toward my Savior and how he cried those words which were my same thoughts to his Father in Heaven when he was suffering in Gethsemane. If anyone understood how I was feeling at that moment it was Him. He was certainly in much more pain and fear than I was in and he was all alone.

Elder Bruce R. McConkie was a member of The Quorum of the Twelve Apostles. He knew he was to die shortly, and this talk was his last testimony. He said the following:

"We do not know, we cannot tell, no mortal mind can conceive the full import of what Christ did in Gethsemane. We know he sweat great gouts of blood from every pore as he drained the dregs of that bitter cup his Father had given him. We know he suffered, both body and spirit, more than it is possible for man to suffer, except it be unto death. We know that in some way, incomprehensible to us, his suffering satisfied the demands of justice, ransomed penitent souls from the pains and penalties of sin, and made mercy available to those who believe in his holy name. We know that he lay prostrate upon the ground as the pains and agonies of an infinite burden caused him to tremble and would that he might not drink the bitter cup. We know that an angel came from the courts of glory to strengthen him in his ordeal. As near as we can judge, these infinite agonies—this suffering beyond compare—continued for some three or four hours." 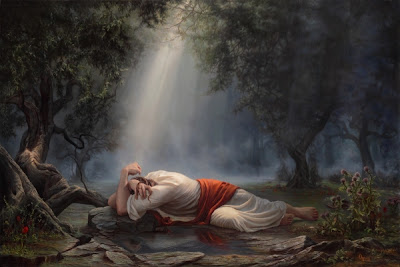 But He suffered for a purpose and so am I. I do not mean to compare myself to Him by any means. I do hope to someday be like Him. And in doing so I want to learn from His example. There are still lessons that I need to learn and to share. I felt very strongly that I need to endure this pain and have faith that things will get better. It may not be today or tomorrow, things may be rough for a little while, but if I continue to work and not give into the despair than things will get better.

The Lord has not given us a spirit of fear! Be blessed.

I have been in your shoes.... Keep looking up to the father. You can do this:) Lifting you up in prayer today!

I am saving this post in my memory for when my anxiety comes back (which is undoubtably will)... thank you for such a beautiful uplifting post. Thinking of you and praying for your burden to be lightened soon. Hang in there.

If for nothing else Aimee, you are helping so many others by sharing. xx

Believe and know you will get through this, one small step at a time. We are all with you on this journey.

I grew up a Catholic, and even thought of being a priest once. Then 12 years ago, I developed these horrible, life-altering panic attacks and was later hospitalized and diagnosed with bipolar disorder. I admit, I gave up on God. People would tell me "Have a blessed day" and I would cringe. I felt so hurt, angry, and vengeful towards God. Worst of all, I felt empty, lost, and alone. I'm starting to rekindle my interest in Christianity again, and trying to figure out what our type of suffering means in the scheme of things. It's tough but has been rewarding. Good luck to you Aimee. I cried many times in the shower at the hospital so as not to wake my roommate. In that regard, I know where you are coming from...

Hang in there AImee. Sometimes it gets worse for a little before it gets better. You got better before, and you will get better again. It always helps me to tell myself that when I have a setback!!!

Thanks for the post. I too pray often in the shower...LOL! Reading your posts gives me strength and hope. blessings to you my friend.

I find the biggest thing to remember is to LET TIME PASS! Anxiety always lessens, and you always get through an anxiety attack no matter how bad you make it or think it will never end....