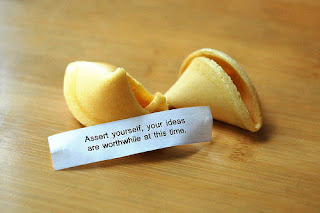 For my work I am a manager over approximately 6 people. I love what I do. I love adding organization to the chaos and being “in the know”. However there are many things about being a manager that I struggle with. One quality that I don’t have is assertiveness. My CEO has told me she wishes I were more assertive. I don’t know if I ever will be.

Every once in awhile I have to have an extremely awkward conversation with one of my team members if they are not performing the way I know they can. I hate doing this and I usually procrastinate doing it until the problem has lingered for far too long. I just want everyone to like me and I know that unrealistic but subconsciously I will try to achieve that anyway.

Today I knew I couldn’t hold off any longer. I practiced several times what I would say to him and then called him in to chat.

Needless to say I was able to say what I had to in a nice way and we were able to talk a bit about it. After we were done I didn’t feel like he hated me nor had any hard feelings toward me.

So I am taking that as success. I may not be the smoothest manager out there, but I can do what has to be done whether I like it or not. That has been the hardest thing about my job. Once I had to fire someone and I was so nervous I had a panic attack right before hand and threw up everything. I think the conversation took about 3 minutes in total. Afterwards I was shaking I felt so horrible. But it had to be done, so I did it.

So even though I really like my coworker as a person, it’s my responsibility to make sure our resources are going to the most qualified people. And even though I disagree with about 80% of everything my CEO says, I really like how she said something to the effect of, “When you don’t say anything about a behavior that is not acceptable, you are ultimately giving them permission.” That employee deserves to know what they can do better in otherwise they will never grow. I know that if I am doing a poor job I would want someone to talk with me about it and give me opportunities to do better before they just decided it wasn’t working out and it was time to let me go.

Two words: Controlled Arrogance. Even if you have to feign arrogance at first, you will become more assertive. That doesn't mean you should become a stuck-up snob at work. It just means that you take on a mystique of superiority. After all, you're the manager. You were hired or promoted to do whatever it is you do. Someone else has confidence in you, so why shouldn't you be confident in yourself?

There are two of me. One's dead. He was the one who was depressed and lacked confidence. Somewhere along the way the depression turned into anxiety disorder, and while that was in many ways much harder to deal with, it did give me a fighting attitude that I lacked before. That's the me of today, although I don't suffer full blown panic attacks any longer. When I did, I had moments of weakness but the rest of the time I'd lay down for no one.

My last job was legal in nature: a consultant for the State of Texas. In doing that I had to both champion causes that I did not believe in (and be very good at it), or I'd have to talk bureaucrats into doing what I thought they should do. My compensation was based on how successful the project was; their's wasn't. It was difficult but it was a good training ground.

Your subordinates and superiors alike will respect you as long as you're fair and you get the job done. They do not have to like you (although if they respect you they probably will, eventually). At my last gig I was universally disliked for a while, and you can probably see why. But it wasn't long before my opinion was respected because it was based on sound legal and business principles. I left my company and my role with the State not that long ago, and they had a party for me. A party for a consultant? That's right.

You can have all the good ideas in the world, but if you do not have the wherewithal to "stand up" to the establishment and say "this is the way we should be doing things from now on", those ideas are wasted. You have to be diplomatic, of course, and throughly prepared if you're ever to disagree with your boss.

Funny thing is, I had these successes for three years, and for most of that time I was suffering from panic disorder. The successes didn't help. I look back on them now and they do, but back then they didn't. I think if I were diagnosed earlier and medicated for panic disorder earlier, I would have been even more successful.

To make this really long comment short, I'll just say that perhaps it's time you re-evaluate what your role as manager is. I think if you truly understand it, you can play the part. And then, with time, confidence will develop. Think about every angle. Prepare. Use every instinct and intellectual tool available to you, and you will succeed.

Wow thank you for the insight. I should have you be a guest blogger sometime :)

P.S. And I will definitely try to fake it until I can become it.

In case you're not being sarcastic, you're welcome. Unfortunately I find that blogging is actually keeping me from doing other things I'd like to get into, and I'm trying to talk someone into being a co-contributer at The Brain. I'll break her eventually.

I wasn't being sarcastic at all, I really would love it but I totally understand. Let me know if you change your mind.