The Importance of Not Avoiding Your Fears A.K.A. Triggers 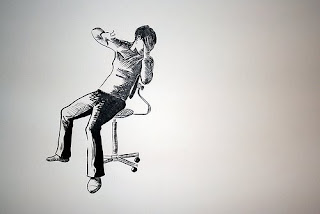 Recently I posted on how to discover what your triggers are. Once you know what your triggers are, its important to not avoid them. I think this is a really crucial thing to remember when trying to manage your anxiety. Avoidance seems like the most natural thing to do. Your insides may be screaming to run the other way. We want to be happy and comfortable, so why on earth would we force ourselves to do something that is scary and fearful if we don't have to?

The reason is because the more we avoid them, the bigger, meaner, and scarier those triggers become. For example, if I don't go out to eat with friends because I know it could cause me to panic, then it will be twice as hard to go out the next time too. And even harder the time after that. Eventually I would never go out at all. And that is how agoraphobia starts.

Sometimes you hear about people that can't leave their homes. They haven't stepped outside in years. This is an extreme case of agoraphobia but it has to start somewhere, and for them it starts because they decide its too uncomfortable and scary to leave home, or their safe zone. Over time of giving into those fears, they loom so large and take over everything else and before you know it you have lost all control.

Avoiding your fears is never going to make them go away, it just makes them worse.

Truth be told I am still avoiding some of my fears. I avoid driving with other people in the car with me. Its too stressful and I would rather have the other person drive my car with me as the passenger then have to do the driving. Eventually someday I may work on this, but for now its not hampering my everyday life to where I can't function. Its more of a quirk I guess. But eating in public is a real trial for me that I do avoid, even now at times.

The important thing to remember is you don't have to take it all on all at once. Break it down into littler steps that appear more achievable. I don't go out with all of my coworkers for lunch because I would rather just eat alone at my desk. I only go out with them on special occasions and those prove to be difficult for me. I want to work on that as well. But you have to start somewhere and the end goal can be far away. You can take as small a step forward as you choose. So for now I go to special occasions so that I don't avoid the fear altogether. Maybe someday I'll be more proactive about going out to lunch with them. That can even be broken down into smaller steps. I can go to lunch, pick the food up, and bring it back to the office. Believe it or not even that step is hard for me right now. But if I do that often enough, it will lose its power as being fearful and I can move onto another step. Avoiding your fears and exposing yourself to them on purpose are two different steps and should each be done when you feel ready.

Give me some examples of some of your triggers and I will try my best to come up with smaller steps that you can start to stop avoiding. Or throw out some of your own so we can all see some other examples.

I've spent 10 years avoiding the world. I now know that is most definitely the wrong thing to have done. Spending periods of my life housebound, got a wee bit better, but now i am back to being almost 100% housebound.

For me, my trigger is steping over the front door threshold.

On a positive note though, i have CBT starting text week to undo the 10 years of agoraphobia.

My heart twists on your behalf (and for all of us) who have to give up so much of what life has to offer because of this disorder.

This is a very informative post - but I think it is good to distinguish between fears based on what motivates them; why they are there in the first place. For me, some fears, like my phobia of flying, respond well to slow, gradual exposure - the baby steps you talk about. But other fears I have are not 'phobia' style fears, and respond only to therapy. No amount of 'slow exposure' could make me eat out of a can because of my fear of botulism; really a fear of violation. But years of therapy addressing the fear of violation (and a lot of other things) and one day I could open a can, after 13 years.

Ive suffered from social anxiety for almost as long as I can remember. Sometime after I entered into my teens it evolved from just being a simple shyness around others, and into an intense fear of being physically ill around others. I avoided being in cars with others because I was afraid I might get car sick, I would avoid crowded places without a clear exit, and I would especially avoid going out to eat. After I graduated I spent nearly a year and a half doing nothing(not working, not going to school, nothing), and eventually experienced what I could only describe as a nervous breakdown where I simply lost my appetite and literally couldn't eat for an entire weak. Since then most these anxieties have disappeared completely, or have become very manageable, but what has remained is the intense fear of eating in public. So I would say my trigger is me being in a situation where I am "performing for people", especially (but not exclusively) in the context of eating in public.
Nevertheless im 23 years old and it gets me extremely depressed sometimes when I think that I might lose the best years of my life to this; I have thrown away so much already because I haven't been able to master my fears.

I love your blog. Just saying.

I'm afraid to leave the house at all, beyond maybe going around the corner sometimes to the gas station for drinks.

And when I'm riding with another person, it's the same thing, only now I feel trapped because I know they are in control and might not turn around at all or will get mad at me if I ask.

Wow these are some amazing comments that have been left. My heart breaks to read what others are struggling with.

Sarahc&hearts- how has your therapy been going? Have you had any successes even if they are just baby steps?

Your hostess with neurosis- awesome comment, I agree with you on finding the real fears within the fears. Thats like my fear isn't necessarily eating in front of others, its a fear of being judged. Please comment again soon, I'd love to hear from you again.

anonymous- I find myself relating the most with you. It sounds as though we are very similar and I agree that it hurts to know we are struggling with this through the best years of our life. Just remember how much more of a deeper, caring, person you are because of it.

eric- love your blog too! Come back soon :)

Maggie- I can't help but notice how many times you said "I should" or "what if". Those are classic examples of the Victim and the Critic inside us that promotes this negative self talk that is really feeding our anxiety. You should check out some of my other posts on self talk, or get the book by Edmund J Bourne because he goes into great detail about how to stop those kinds of thoughts which will lower your anxiety levels.

Mindfulness meditation, for example. This is a great way for all people to treat panic attacks, and that includes pregnant women. There are lots of free resources online, teaching wonderful, natural mindfulness techniques for overcoming panic and anxiety and
learning to relax in any situation.http://www.buy-xanax-online-now.com